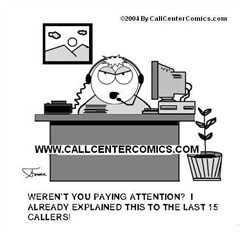 We once bought a bed, a big bed that would accommodate the two of us recovering after surgery.

The nice sales people were very helpful, and even gave us the card of someone who would put it up for us, as we could not lift heavy things.

The bed was delivered in the week they said it would arrive. The man with the tool box arrived, opened all the boxes and told us that the foot of the bed was missing.

We called the customer service department, and were told they would look into it and call us back.

We called again and were told they would look into it and call us back.

We called again and were told they didn’t know whether it was a distribution or a warehousing problem. We pointed out that didn’t matter to us we just wanted the foot of the bed.

They said they’d come back to us.

We called again, this time pointing out nicely that we really did need the foot of the bed. I explained all of the boxes that we had received and repeated several times that we seemed to have two of the same ones, but the person I was speaking to didn’t have the information of what should have been delivered, and how it was packaged.

The foot to the bed was delivered. The nice man with the tool box came back, and put the bed together. He told us that there had been two sets of bed slats delivered, the large box that I had told the lady in customer services about.

I called customer services, starting by asking for the bed slats to be collected.

I explained, nicely, that we wouldn’t be paying £15 for the council to collect the bed slats when it wasn’t our fault that we had them.

“Oh”– I said thinking we’ve just paid hundreds of pounds for this bed and one of the main components isn’t worth collecting, in fact, its’ value is £15.

I then explained the mattress was too small.

“we’re allowed tolerances” she said. I thought I had been very tolerant so far.

“What does that mean?” I asked

“Well, the manufacturers are allowed to make a mattress to certain tolerances, you’ll need to measure the mattress and give us the measurements in centimetres together with your invoice number”

“Give me an email address and I’ll send photos” I said, which I did there and then.

The lady I spoke to called me back, the finance department wouldn’t authorise the payment of £15 without a receipt from the council. I pointed out that I was really amazed that the part of the bed that we had paid hundreds of pounds for was only worth £15.

She arranged for it to be collected the next morning (which it was).

Three working days later and the email hasn’t been acknowledged, let alone the next steps explained to me. I suppose this will be a manufacturing problem and nothing to do with customer services…….

Shall I offer them our dealing with angry customers training course?

Is this bad customer service or par for the course?

You’re probably shaking your head at this story and might be thinking about when something similar happened to you. Why? Because it’s so easy to see it from my point of view when you read this. Somewhere we forget to see it from the customer’s point of view and only see our systems and processes.

Bad customer service comes from when the companies procedures take over, and the only point of view that can be understood is the internal one “we don’t know if it’s a warehousing or a distribution problem”

If you want help transforming your customer service operation, call us now on 0845 450 0988

It will cost you money if you ignore it.

UPDATE – Find out what happened next, and the email response I received. There’s lessons about what you put in writing. Bad customer service – part 2

Our Customer Service Training expertise will help your people develop the skills and confidence to deliver exceptional customer service. Call us 08454500988

Complaint Handling Training, boost confidence and skills of your customer facing people so that you retain more customers when things go wrong.