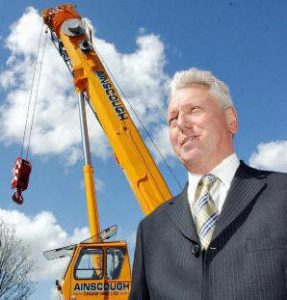 Martin Ainscough together with his brothers Brendan and James, established Ainscough Crane Hire as the leading Crane Hire company in the UK.

Having sold the business in 2007 for £255million, Martin gave our MD, Diane Banister an interview, describing the growth and success of the business.

Diane worked with Martin and his leadership team for over 8 years delivering management development, sales and hire controller training.

Ainscough Crane Hire started in 1976 with 6 cranes.  I was the Manager, my sister did the accounts, 3 of my brothers drove cranes and we had 3 or 4 drivers.

Before then it was a scrap metal business and that’s how my dad first bought a crane.

By the end of the 80’s we were a £3 million turnover business making a £1 million profit which was phenomenal when you think a million pound back in the late 80’s was a lot of money and it was a great margin and we were running a great business.

That was centred around the fact that we became a dominant player in the North West. We were very efficient, we ran it very very tight and it was just 3 depots, £3 million turnover and a million pound profit …fantastic.

And then we decided in the 90’s that we could actually grow this business further, we got our confidence and we got the ambition to become a national company.

The early 90’s coincided with the recession at the beginning of the decade, we decided that geographically we had 70 cranes, things were slowing down a little, we wanted to keep working, how could we do that …  spread ourselves geographically.?

First of all we moved into Scotland where we took over a business called Interlift.

Then another business over in Newcastle went into receivership and we took on Peter Kernohan, the beloved Peter, and his team up in Newcastle and that depot made money for us every month since the day we took it over.

So at that stage we took in some private equity funding and that gave us the wherewithal to go and buy businesses and we bought businesses in Kent, London, Coventry and Bristol. Gradually throughout the 90’s, through a mixture of greenfield opening, taking over failed businesses and buying out other small businesses we ended up with about 15 depots throughout the UK. By the end of the 90’s, we’d gone from having 70 cranes to having 300 cranes.

We were the biggest independent; our competitors were Grayston White & Sparrow who were owned by Rentokil which in those days would be operating 500 cranes, Hewden Stuarts operating probably 300 cranes, Baldwins Crane Hire operating not just in the UK but in the States as well and with big cranes.

Because of the competition and supply in the market at that stage, the margins were thin. At the end of the 90’s we were probably doing £30 million turnover and still making £1 million profit which is not a very smart way to do business. The reason that we tolerated that situation was that, I always had the knowledge and the confidence that sooner or later one of these other major competitors would have to change their operation.

They would have to reduce their costs, put prices up, hire rates were uncommercially low, there was over capacity in the market and we were all very busy fools. That was when you were helping us to protect prices.

The big break came really in 2000 when Rentokil put Grayston White & Sparrow up for sale; which we eventually bought.

I wrote to Lazard Brothers to say ” here I am little old Martin Ainscough from Wigan and I would like to come to talk to you about buying Grayston White & Sparrow”  and I got a letter back saying do you realise how big this business is?

So I wrote back and said I know exactly how big this business is, I know far more about this business than you do as that’s my job. We were eventually given a meeting in November in a very fancy office block in London.

Neil Partridge and I went down to London with one of our advisors and went into this meeting. This Frenchman asked me how much I thought Grayston White  & Sparrow was worth and I said in my usual Wigan twang “ With respect sir, you’re the seller you’ve got to tell me how much you think it’s worth.”

He said he thought it was worth about £40 million and I said “well I’m very sorry but my opinion is that is probably more likely worth £12 million.” At that point we were politely asked to leave.

Where the figure of £12 million came from was that was the maximum amount of money we could raise at the time.

Dead easy, it wasn’t a case of well why didn’t we offer him £30M or £40M we could only raise £12million that was our absolute limit.

So we came away from London disheartened, but nevertheless conscious that something was going to change within the industry and hopefully that would lead to better times.

About 8 weeks later, I got a phone call asking if we would go back to London, which is obviously a very encouraging sign. We were fortunate in the respect that we also knew that our competition at the time, Hewden Stuarts had been taken over by Finnings so they were in disarray. Baldwins had gone public and were having problems in the States so their share price had collapsed and they weren’t in a position to buy,  so there was no other obvious UK buyer.

So we went back to London and we did a deal and bought the business for £12 million and £3 million deferred, effectively they loaned us £3 million that we paid them out of future profits.

The clever trick then, the thing that really made the difference, if you put two businesses together, one’s got 300 cranes and one’s got 500 cranes you’ve got 800 cranes you haven’t actually resolved anything.

What we did was to send 150 of the oldest cranes to a big auction in Rotterdam with the proviso that nothing could come back to the UK. We sold 150 cranes at auction and got about £4 – £5 million back straight away, so that was helpful.

We recruited from Hewden Stuart because we needed some assistance on the operational side of things and Ray Ledger joined us.  He was probably the best cost cutter I’ve ever come across and to his credit he executed a phenomenal job. We reduced the fleet down and took cranes out of the market and then over a period of time we then sold another 100 cranes replacing some of those with part exchanges for new ones etc.

So we modernised the fleet.

We sadly had to make about 500 people redundant because Grayston White & Sparrow had a massive head office in the North East. We merged depots together and had some new ones which took our depot count from 15 to 25; we were then the biggest player in the UK.

These were glory days, these were the days when all the hard work is paying off. All the development we did with you, the selling, the systems, took a lot of effort and god bless Richard Prince and people like that, unbelievable team of people.

So as well as getting all these new cranes, we were able to beef up the team, we got Steve Cook on the engineering, we got lots of different really really good people.

And then as well at that stage in my life never being content. Although obviously we were then doing very well as a business and we were constantly watching our competitors.

We had our ducks in a row. By this stage we had demonstrated to the banks that we were capable of consolidating positions and making something out of an acquisition, not just making a bigger business that doesn’t make any more money.

So we bought Baldwins, but we bought the UK operation only.  We put more cranes into the depots, so there was more utilisation without adding to the cost. We only increased the depot network by one, we streamlined the fleet again, probably took another 100 cranes out of it to tighten the market up, to make sure we had the best possible fleet. n 2006/7 we were a £100 million turnover business making £25 million a year profit.

That was fantastic. And then just to conclude the story, we were massively dominant in the market, probably 5 times bigger than our nearest competitor, which at that stage was still Hewden Stuart.

In terms of big contracts we had to be careful, we dealt with it all properly. You can’t alienate customers, you still have to treat your customers with respect, but we were able to work on more commercial terms, massive utilisation, still running cost tight, maximising the strength of the depot network and the big cranes etc.

The rest of this fascinating series

An Interview with Martin Ainscough Part 2 – Finger on the pulse

An Interview with Martin Ainscough Part 3 – Risk and Reward

An Interview with Martin Ainscough Part 4 – How Training Helped

Get in touch now, book a conversation where we will explore the challenges you face, and jointly develop a blueprint for the way forward.

If utilisation, protecting price and profits, making the most of the opportunity, business growth, and productivity & focus are important to you, call us 0845 450 0988 or get in touch via the web now